The Rudeness of Strangers

I was recently insulted by a virtual stranger. I didn't realize it at first since it was masked with a smile in an otherwise polite conversation, but her words were neither compliment nor pleasantry. In a different tone, it would have been obvious, but it took a few sentences and a polite chuckle for it to
sink in.

When we're insulted by someone we barely know, we never respond how we'd like because it's so unexpected. We have the perfect responses after the comment stews in our mind for a day, and we know exactly what we'd say if we were in that situation again. But we never are, so we just have to take it. But The Hen is here to cluck about some of those times where I was accosted by some jerk stranger or acquaintance.

I went to the dentist this week for my yearly check up, beak cleaning, and bird bath. The receptionist is always very friendly and asks about Hens on Ice. She asked what roles I play. I said, among other things, that I'm an understudy for Woody from Toy Story.
"Oh, I love Woody!" She said, "But I just can't see it in you." She kept smiling, staring at me, clearly struggling to imagine me as a cowhen.
Thank goodness Melinda at the dentist office has nothing to do with Hens on Ice casting; she'd have me benched from a role that my bosses, friends, and family find fitting for me. And anyone else who may think I suck at the role or look terrible in the costume has kept his or her beak shut, as they politely should. Stick with the scheduling and the phones, Melinda.

While on a road trip with a hen friend, we stayed a night at my friend's friend's house. The family was kind enough to keep us and have a barbecue. I had just finished college, and in making small talk, the father asked me what I studied. (I majored in Sociology and Spanish)
"Sociology and Spanish? I hear they're hiring at McDonald's for that."
I gritted my teeth and politely laughed. Friend's friend's dad didn't. He wasn't joking, even thought it would have been a poor joke. Even with my worthless degrees, I know that's a good way to end a conversation, sir. Now give me a hot dog.
I wish he could see me now with my master's degree and artichoke costume. 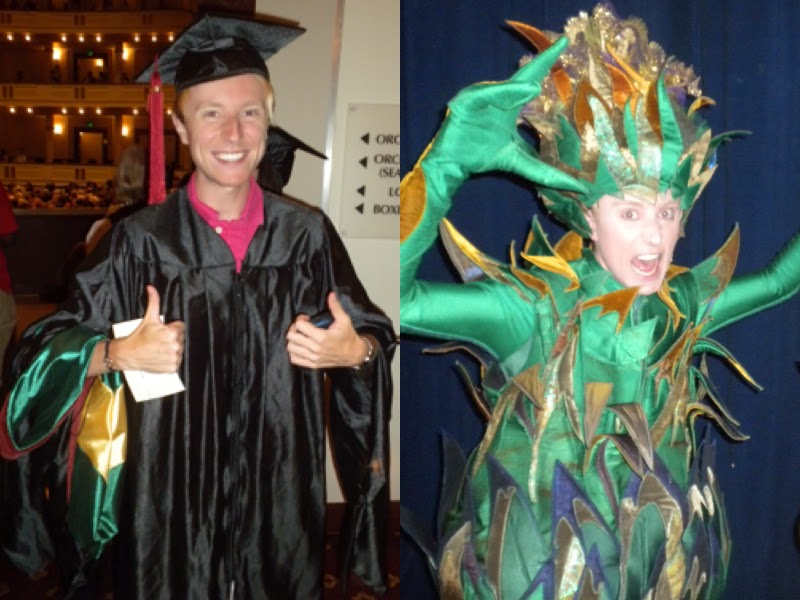 Sadly, that wasn't the first time someone told me my educational choices were stupid. During a break from college, I had dinner with one of skating coaches and her husband. When I told him what I was studying (see above if you forgot), he said, "Stop wasting your time. You won't make a dime with that. Get out while you can." My goodness! Not even one dime? Since my apparent response to harsh, out-of-place comments is uneasy laughter, I laughed uncomfortably. He also did not laugh, and continued to badger me on what a poor decision I'd made. So much for pleasant dinner conversation after being away for months. Can someone please pass the wine?
I wish he could see me now with my master's degree and artichoke costume.

But the most shaping rude comment came from a mere acquaintance when I was a 12-year-old chickadee. I was forced to go to the skating club's annual summer picnic. I was shy and self-conscious, convinced that most of my skating mates didn't like me. Thankfully, one of my chickadee skating colleagues, also 12, confirmed my suspicions. When I joined a seemingly friendly game of running around with water guns, this little chick (let's call her "Bitch") stopped the entire water-gun-playing group and hollered, "Don't waste your water on him! He's just a pathetic loser who will never amount to anything!" Did I mention that we were 12?
Bitch and I were not friends (clearly); we'd never even had a conversation. We just skated at the same time and the same place, but no romantic comedy ensued. Her F-bombs and yelling had scared me since we were 10, so I did what any smart chick did - tried to stay out of her path and avoided eye contact. But I guess something went wrong in our coexistence and she let us all know at that picnic. To whoever said "life is no picnic" - thank God! Picnics are rough.
I wish she could see me now with my master's degree and artichoke costume.

Where did these people learn their manners? I'd blame the Internet, but they were raised before that. Such rude comments are only meant for family members, teenage girls, and politicians. But the joke is on all these people: I'm stubborn. I didn't just get one worthless degree - I got 3! And "pathetic loser who will never amount to anything?" Ha! I skated 24 years to become a professional artichoke.*

*I began skating 3 years before I was born.

Read more!
"Exciting American Things!"
"Dear Hen, My Boyfriend Loves One Direction!"
"I Make Rash Decisions."
"Embarrassment Behind the Ice."
Posted by Robbie Ice at 9:24 AM