Flying High With One Direction

In the history of Hen columns, I've pecked at One Direction more than once - four full columns and countless mentions to be exact. I'm interested in current pop culture and great music, so I keep a hawk eye on the 5 lads, especially when Britney Spears is quiet from extra prescription drugs. So when a 1D scandal flooded my news feed late last night, I had to flap to the issue at a hen's pace.

When a video leaked of Louis and Zayn proudly smoking marijuana flapped onto the Interwebs, social media nearly exploded as the viral video plucked away some of the gents' clean, boy band image. While I'm sure many fans and parents were dismayed to see their admired boys partaking in something they don't support, marijuana isn't the headline here. The news this story reveals: Louis Tomlinson is a bigger idiot than we assumed.

With our highly-revered celebrities, every single move of theirs is a headline. Justin Bieber gets a haircut! Beyonce's thigh may have been photoshopped! Britney Spears is dating a man! Someone tell me when they actually do something noteworthy, like shave their heads or have a "wardrobe malfunction." So when the 1D pot headline hit, I wasn't horribly shocked or dismayed at what the guys were doing, but more the fact that it was bluntly on video. Zayn and Louis were in Peru partaking in a locally legal activity as legal adults. Boring. 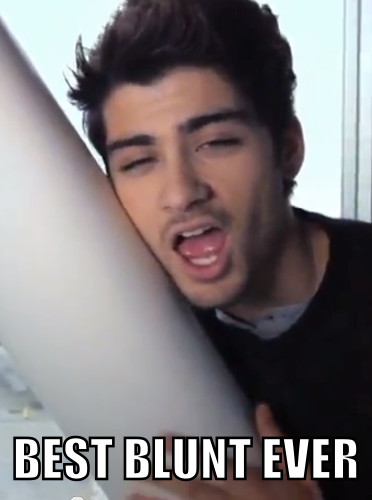 But what baffles me is that this isn't some paparazzi or crazed fan footage, this is Louis Tomlinson himself filming and nobody in the van is suggesting it might be a poor idea. What kind of management is in the front seats, thinking a video of clean-imaged boy band members partaking in a controversial activity on video is fine? While I don't care, the majority of their fan base (surprisingly) is not twenty-something-year-old male hen bloggers - it's fueled by teenage chicks and their parents funding their devotion. Parents and young chickadees aren't typically as open-minded to their "perfect" pop stars doing drugs. Although Miley Cyrus is doing fine...

So, what does this video really mean?
A. Louis is an idiot.
B. Their managers in the van are idiots.
C. No one in the van gives a shit about the video getting out or keeping a clean image for the band.
D. All of the above.

As if recording this isn't bad enough, hearing Louis talk is cringeworthy, as he's almost boasting about it. He's narrating in a way to make it clear it's pot, and that it will be "controversial." The video is so blunt, it makes me wonder if Louis wanted the video to get out. Or he was so high he hit "share" instead of "save."

Stick with the singing, boys. And maybe hire some new managers.


Read more about One Direction! "Up Late With One Direction! The Good, the Bad, and the Ugly."
Dear Hen, My Boyfriend Loves One Direction!
Enough with the British? "Exciting American Things!"
Posted by Robbie Ice at 10:49 AM