From Hockey Hater to Lightning Lover

As I still wipe away tears of joy from the Tampa Bay Lightning's second Stanley Cup Championship in a row, and throwing all my money at new championship merch, I realized that all this was not for my beloved Buccaneers. What was I doing and how did this home-wrecker of a team glide into my heart too? I'm adding more Lightning blue garb to compliment the Bucs red in my home, accidentally displaying enough blue and red to look that kind of "patriotic" I'm not going for. Now that I'm in too deep emotionally and financially, I'm reflecting on how I accidentally became a hockey fan and self-diagnosing a new mental condition. So join me on my journey from hockey hater to Lightning lover!

Growing up as a figure skater, hockey is the rival sport. We share a building with ice, but nothing else. We have different skates, different blades, different bags, different clothes, and drastically different smells. Hockey players and their locker rooms have a uniquely putrid smell that one must experience to truly know, but it's some pungent mix of sweat, rot, and machismo that seeps into floors and walls forever. I refused to train hard enough to sweat as a figure skater, and I always blitzed out of my childhood ice rink before anyone could ever smell me or call me a loser. Also in the 90s, boys were supposed to play hockey and girls were to be figure skaters. As a male figure skater, I felt uncomfortable with these expectations for boys and girls on the ice, but nothing sway me to try skating in sweaty pads without toe picks and double axels. To survive, I built up a feeling of superiority over the rival ice sport. Sure, hockey was supposed to be for boys, but hockey was smelly and hockey players were stupid brutes. My figure skating skills were more difficult and refined. (I still see non-Lightning players as stupid brutes.)

As I got older and gained more confidence being a male figure skater, I finished my competitive career with a new indifference toward hockey. It was no longer a threat, and my new home in Florida had a respectable hockey team: The Tampa Bay Lightning. They shared the "Tampa Bay" with the Buccaneers, but left out the embarrassment. The occasional cheap Lightning game was a great event to have expensive beers with friends, support/harass my cheerleader friend, sometimes watch the guys chase the puck around, or even be blissfully unaware someone took me to a game as a date. Times were drunk and simple, and my stakes were low as a Lightning fan.

After years of galavanting the globe with Hens on Ice, I returned to Florida unemployed, lost, depressed, and with ample time for local sports! With my beloved Bucs in the midst of a 20-year "Succaneers" suck-fest phase, I started going to some more Lightning games with my dad or hen friends. As a battered and hurt Bucs fan, I started paying more attention at Bolts games. They were different: They won games! Fans didn't boo their own players! The games were high-energy and fast-paced on ice! And as I took all that in, I had a bigger epiphany: hockey is an ice sport like figure skating! The players I was watching weren't those smelly, talentless thugs from my childhood ice rinks. These Bolts boys had  devoted their lives to skating and their sport just like I had! (But probably smelly)

In the midst of pre-2020 Buccaneers (Succaneers) loyalty, it was also refreshing to support a winning team (but without a long history of winning or a nationwide fan base - key to maintaining my character). My weird childhood Bucs fandom had slowly morphed into a true Tampa life - I became a local resident and all-too invested in Tampa sports teams.

Two years ago, the Lightning were the best team in NHL hockey history, only to finish with heartbreaking defeat in the first round of the playoffs. Last year was true redemption: Champs after the jarring and isolating pause of a global pandemic. A magical moment in an unprecedented time.

This season, the world and hockey glided back toward a sense of normalcy. Fans returned to the arenas, and once again, we got to be part of the game. As we slowly process what we missed and lost from this pandemic, I returned to the arena to cheer on my favorite hockey team with more joy and meaning than ever before. The Lightning had persevered through a global health crisis to win a championship, then returned a few months later to do all they could to repeat the big win.

And they did: they won it all and kept the Stanley Cup - But this time, on home ice, with thousands of fans roaring and shaking the arena. This time, we all shared in the experience and journey more. In going to key playoff games, including the win that got them to the finals and the first win of those finals, I personally witnessed and felt the talent, poise, and energy of this Lightning team. I felt the heart of this team: talented, dedicated individuals working together to be the best team. But this time, they were the best team winning it all with their fans. And it just feels good to be one of them - a tiny part of a moment of greatness and joy. (and just far enough away from the smell) 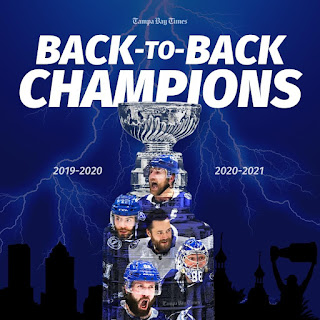