Apparently the Super Bowl wasn't just last week, so it's been an unacceptable amount of time since this hen has clucked out an article. Since I don't want to take full blame myself, I'll put most of the responsibility on winter. I don't like it; it's too cold, too snowy, too dark, and everyone's pissing me off. But being a resilient bird, I won't let this publication freeze out just because I'm cold and irritable. The articles must go on!

Thankfully I'm not the only bird affected by winter. We're all cooped up, more than any hen should be, and it just takes one wrong glance to send anyone into raging clucks of "You never loved me!" and "Don't you dare look at me like that again!" 'Tis the season now that Christmas is a distant memory.


I had lunch with one of my best hen friends Anna the other day to break out of some of the winter blues. We chose to be cooped up together in a wonderful but tiny noodles restaurant. The restaurant only has bar-like seating along the window and walls, and we perched on two open stools. Under the table top were some hooks to hang our coats. After we sat down, the server insisted we both move over one seat. He gave no explanation, but insisted. Didn't he realize it was winter and I was one question away from throwing the menu in his face? But we shifted so he could hold his server authority over us.

A few minutes into cackles and hot tea, a woman sat down in the empty stool next to me. Although the quarters were tight, I didn't pay much attention to this hen. My friend and I were engaged catching up, and this neighboring bird didn't seem interested in acknowledging us either. She seemed normal enough engaging with the server, aside from an awkward minute she buried her face in her wings motionless and seemingly stressed. I felt for the poor bird, we all have stress in our life, but what could I do as a stranger, practically sitting in her lap, who would leave her life once our noodle broths got cold?

Anna and I finished our wonderful meal and chatter, paid the bill, and stood up from our seats. The woman next to me had also finished and paid, and stood to bundle herself a moment before us. She seemed ready to leave, so I gave her a moment before I'd grab my coat. However, she lingered in her spot after her coat was on, just standing there. I decided to make a friendly grab for my coat since I didn't know what she was doing or how long she's be there.

"Excuse me, I'll just get that out of your way." I said with a smile as I reached for my coat.

"Better late than never." She said with a burning smugness oozing from her feathers. With that pecking remark, she flapped with purpose straight toward the stairs and door. Anna and I stood frozen in shock.

"Okay..." I said once I closed my beak from shock. We stepped outside to look for this agitated woman, but she was out of sight. She must have flapped out of there at lightning speed.

During her meal, my coat may or may not have been slightly against her leg, this was enough to put her in angst, waiting for the chance to give me a passive aggressive zinger. From the second she sat down, she could have asked me at any point to move my coat and I would have been happy to oblige. But being miserable over her noodles and dumplings for an hour so she could put me in my place was better for her day. 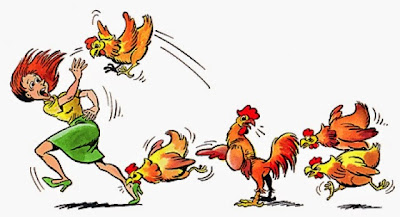 Keep reading! The Rudeness of Strangers!
I Just Want a Sidewalk!
Posted by Robbie Ice at 10:02 AM