Why The Backstreet Boys Are (Still) Great

I recently went to a Backstreet Boys concert and, in all seriousness, it may have been one of the best concerts I've experienced. No, it's not 1999 and I'm not a 12-year-old hen. I had never been to a Backstreet Boys concert in the peak of boy band craze, so I couldn't pass on this reasonably priced ticket while they were all still together and with minimal grey hair. And with DJ Pauly D and Jesse McCartney as opening acts, I couldn't miss it. I'm good at first pumping with my wing.

Maybe the nostalgia had something to do with it, but the concert illuminated that The Boys are defying Father Time and are still great. Here's why:


1. All 5 of them are together! And with none of them having standout solo careers, they belong together, especially with 20 years of history. Kevin left for a while, but I'm glad he came crawling back. I hope he thanked them for keeping it going while he was away. 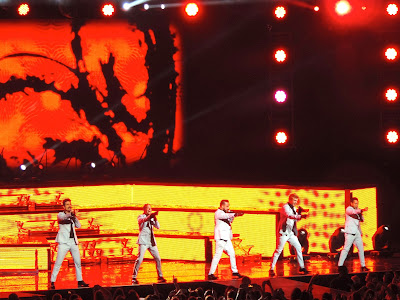 2. The audience was one of the most excited and happy crowds I've seen. This is typically the case at concerts since people don't spend big bucks to watch an act they hate. But this concert stood out because there was also such a powerful feeling of nostalgia in the air with this band that had spanned so long. Most of the fans had seemingly been fans as kids and teenagers during the Boys' peak, and here they were again, as youngish adults, with friends or dragging their boyfriends by the belt buckles. Nostalgia is a powerful thing when we can relive what made us happy as younger birds. 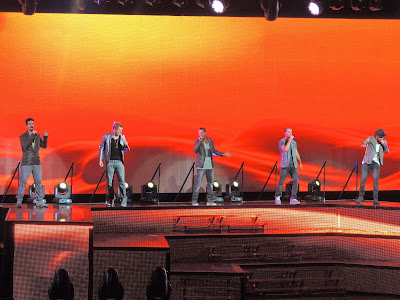 3. If I'd have known nothing about the band, I would have assumed The Backstreet Boys were still in their prime. I may have been sitting too far to notice any crow's feet, but they all sounded and moved great. No wonder there was such a craze! They really still are the full package - powerful singing, great choreography, semi-matching outfits - they put on an awesome show. Then considering that they are no longer spring chickens, their performance is even more impressive. Two of the members have hit 40, and the others aren't too far behind. If they still have the moves, the spry boys of One Direction have no excuse for not dancing. Sorry boys, these men are outshining you! 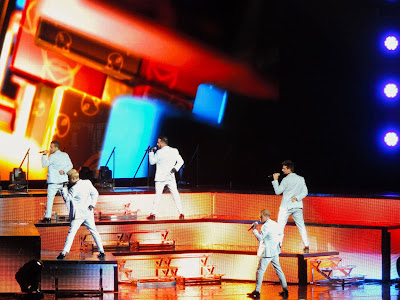 4. The concert reminded me of my true calling in life - to be part of a boy band. Lack of vocal training aside, I'm the victim of being born in between boy band eras. That's the main reason why I'm not 1/5 of a global phenomenon. When The Backstreet Boys and *NSYNC came together, I was too young. When One Direction hit the scene, I was too old. In my prime pop star years, there was a void of boy bands. *NSYNC and BSB saturated the airwaves and unintentionally ruined my chances of following in their footsteps (I accept the fact I'm no Justin Timberlake). I distracted myself with figure skating and school and it's worked out well enough. My chance to be part of a global pop music sensation may have passed, but for those two hours at the concert, I was a Backstreet Boy. Move over, Kevin! 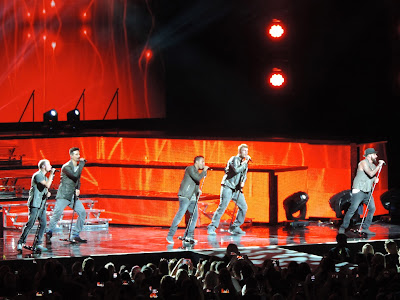 5. I'd lost my self-consciousness that consumes our middle school and high school years. Our peers shaped much of what we liked, and we had to hide the rest until we gained some confidence and stopped caring about peer pressure. I couldn't openly love The Backstreet Boys as a teenage rooster, especially as a rooster figure skater, unless I wanted to be pecked into chicken strips. Thankfully, I outgrew my teenage feathers and proudly listen to music I like. I've compensated for my boy band suppression by latching on to One Direction with all the strength of my talons. And now I'll listen to any boy band I want anytime I want. I have minimal shame and a confident, "don't give a shit" attitude, so when it comes to The Backstreet Boys, I have no more hesitation. I felt liberated and carefree the entire concert, and that's a powerful feeling. 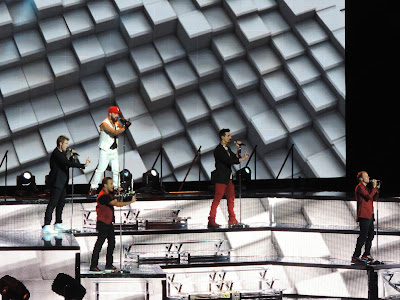 So thank you, Backstreet Boys, for your tour and years of music. I could relive a feeling of my teenage years through rose-colored glasses, without the angst and with a beer in hand.

*All photos taken by Robbie Crowley for The Cackling Hen
Posted by Robbie Ice at 8:42 PM