Things Only Britney Can Get Away With... 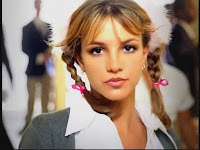 Through the chart-toppers and head shaving, Britney Spears is a pop icon and household name. Like all celebrities, she has her many critics. But she is the enduring Princess of Pop through it all, in spite of not being the best singer, the best dancer, nor the best blonde. She had the "X-Factor" before it was a show, and there's something about that sultry gaze she's given us since "..Baby One More Time" that's hypnotized us to crave hit after hit. Sure, Britney doesn't have the same pipes as Christina, and her videos don't have the Gaga freak look to get the hits, but she established herself as Britney Spears: the diva who can get away with what no other diva can.

1. "It's Britney, bitch." What else needs to be said? Entertainment Weekly included it in its quotes of the year. Sure, some artists name drop in their songs so we know which auto-tuned singers they are, but that added "bitch" as the end brazenly caught our attention. We already could identify that gravely whisper and throaty vocal anywhere, but Britney did it just because she could. No one really seemed shocked, it just reminded us why we pay attention to Ms. Spears. What a kick off to that first comeback attempt!

Anyone that can make any form of a comeback and a music career after this 2007 train wreck is nothing short of A-MAZING. 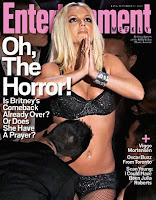 3. "If U Seek Amy." Britney found a way to literally spell out that everybody wants (or at least has wanted to) F.U.C.K. her through song lyrics that don't really make sense. No, she's not one those womanizing rap artists. She's mainstream, addictive pop Britney Spears. Only Britney could get this gem past the FCC and on to radio airwaves (although many stations played the lame "edited" version, "If U See Amy." That just really makes us wonder who Amy is.). And not only did the chorus chant that all of the boys and all of the girls are begging to "If U Seek A" her, some of the lyrics are just plain silly. Some of my favorites include:

But, it worked! The single has sold well over one million digital copies in addition to the Circus album sales. Any other singer would have been laughed out of town, but Britney rocked it, owned it and made it a successful single with a music video. The video even parodies one of her critics. Talk about a big "F- you" (or If U) to that lady. If only I could say silly things and make millions of dollars. This hen is currently a volunteer author.

4. "Radar" (Better known as "Radah"). Britney picked up a Boston accent for one word on this song, but it isn't just one word - it's both the song title and the most repeated word. Thankfully she drops the Rs off both "fader" and "later" to keep the rhymes going. The lyrics of the song also end 30 seconds before the song ends, ending with 30 seconds of Britney "da da da" baby talk babble. She's not done! Sing some "da"s Britney - we love you!

5. Britney talks in a lot of her songs. It started with that cheesy dialogue in "Oops I Did it Again" where her suitor got her the Titanic jewel, and it just escalated from there. She then took her talking to many intros of her songs, or the first 30 seconds of her songs, peppered with talking in the background even when she's singing. But as long as she has a catchy beat and that sultry voice, she could probably talk through an entire song, and it would still be a single. That would even be too weird for Lady Gaga.

After a quick cruise of my iTunes, I quickly picked out these hit singles where Britney chats us up. This is kind of a long list, Britney.

My Prerogative
Gimme More
I'm a Slave 4 U
Oops!...I Did It Again
Boys
I Wanna Go
Do Somethin'
Radar
Break The Ice
Womanizer
Hold It Against Me
Breathe On Me
Overprotected

Oh yea, and she still has a career after her marriage and children with Kevin Federline. Woof.

KEEP READING! "Pretty Girls! The Good, the Bad, and the Not-So-Pretty."