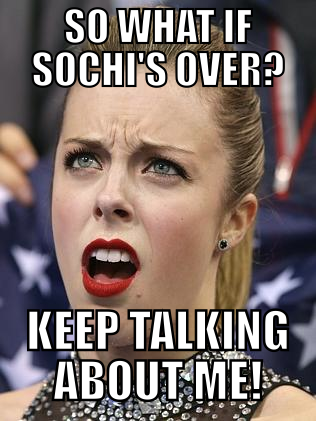 I had a good run riding on the coat tails of a grumpy cat, but it's back to reality for The Cackling Hen. I can only gain so many followers from doing nothing more than clicking a button, so it's back to writing for this little bird. Sure, I wrote about Estonia in award-winning fashion, but Tallinn doesn't have the same draw as an angry kitty. Maybe one day it will.

Inspired by the events of the Winter Olympics in Sochi, I wanted to stir the pot with cackles instead of a spoon. I had plenty of opinions on the figure skating events, so I chose to write a letter to Ashley Wagner. Her sour reaction to her scores froze in time in meme form. I thanked her for the new meme, but also had my two cents on her bold presence at the games. Unfortunately, it's hard to type with wings, so plenty of birds clucked their thoughts before mine. Now it's March and #AshleyWagner is irrelevant. Sorry, Ashley, but thanks for the face.

My unfinished letter to Ashley joins a scrapped article on Poland and my middle school novel attempt among many unfinished attempts at greatness. Depressed about my recent lack of writing and Ashley Wagner's recent irrelevance, I almost threw The Hen out the window and resolved to have just one personality. But I realized that while I may be in an English-speaking country, I'm not done embarrassing myself.

Yes, the Brits speak English, but after months of using my English skills in places like Poland, Serbia, Hungary, and other cloudy places, I've gotten in a poor routine of how I communicate with locals: smile a lot, speak slowly, and speak in awkward, broken English. This sufficed for the most part, but that kind of talk in England gets me odd looks and British accents. I don't even sound American anymore, I just sound stupid, putting random words together and leaving out some verbs and articles. Sorry, England! I've been in Scandinavia for too long. I'm still thawing.


On par with my broken English is my "British accent," which can turn Irish, Russian, or just idiotic at any given word. With many British cohens, I've worked on a British accent in the safe confines of Hens on Ice. Now that I'm too comfortable yelling, "ELLO!" and "Oy, sausage!" as greetings, my accent attempt flies out to the common stranger before I can clip its wings. Sadly, my accent is not good enough yet to sound local, so calling the receptionist or bartender a sausage hasn't gone over well. I doubt calling anyone a breakfast meat will be well-received in the U.S. either.


But aside from making a frequent chicken butt of myself, the UK is a-ok. The temps are warmer, we all speak a similar language, and the British Pound looks light next to any Krone. Until next time, cheerio, sausages!
Posted by Robbie Ice at 2:24 PM