"Marriage equality." "Same-sex marriage." "Gay marriage." "Grumpy cat memes." All these terms have been thrown around incessantly as the Supreme Court debates on California's Prop. 8, which banned same-sex marriage (but thankfully not grumpy cats) in the state. Since it's such a hot-button issue and I
hate being cold, here's a peck at the matter from The Hen.

As a reasonably educated hen, this heavy debate involving the government, religion, gay rights, human rights and grumpy cats doesn't make much sense. As much as I love warm temperatures, it's gotten far too heated for my liking. The issue of same-sex marriage doesn't personally affect the vast majority of Americans, so why do so many hens have their feathers beyond ruffled?


But good news - The Cackling Hen is here with a solution to end all this silliness. Wanda Sykes said it best years ago when she said, "If you don't believe in same-sex marriage, then don't marry somebody of the same sex." Apparently that wasn't enough or no one listened to her, because so many people are still up in wings about it. I don't know why Wanda put it in her comedy routine; it just makes sense to me.

Same-sex marriage gets too tangled in with religion. This country was founded on freedom from religious persecution.  Then years went on and many people decided to persecute other religions that arrived on this land. Regardless, all religions are similar in some ways and different in others, and The Cackling Hen respects that and the fact that we will never all agree on one religion and a belief system.

There's a thing called "separation of church and state" that I thought was prevalent here. If that's the case, any arguments against same-sex marriage that have ties to a faith, God, Jesus, Grumpy Cat or the "sanctity of marriage" have no relevance when it comes to legality under federal law. If there are churches and faiths that don't support same-sex marriages, that's fine. Don't support them. The same-sex couples probably aren't wanting to get married in churches that call their lives sinful anyway. But even the President of our country has said he thinks same-sex couples should have the right to marry. I know we don't live in a monarchy (thank Grumpy Cat), but I like to think Obama's view on the situation could influence legislation.

The Hen's solution to all this kerfuffle is to keep religion out of it since it's a governmental issue. Churches that don't want to perform or recognize same-hen marriages don't have to. But from the government's point of view, what difference is a married couple if they are two hens or two roosters or two grumpy cats? This country has always been the land of the free, if you're a heterosexual white male who wasn't born into poverty. Since starting with those heartwarming principles, our nation thankfully has included minority groups one by one into the "free" category where today, most everyone has mostly equal rights. We're getting close and hopefully one day soon all hens will be treated like they were "created equal" and can marry whatever hens they love. 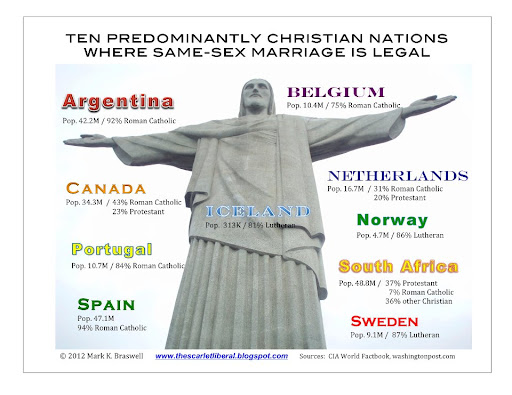